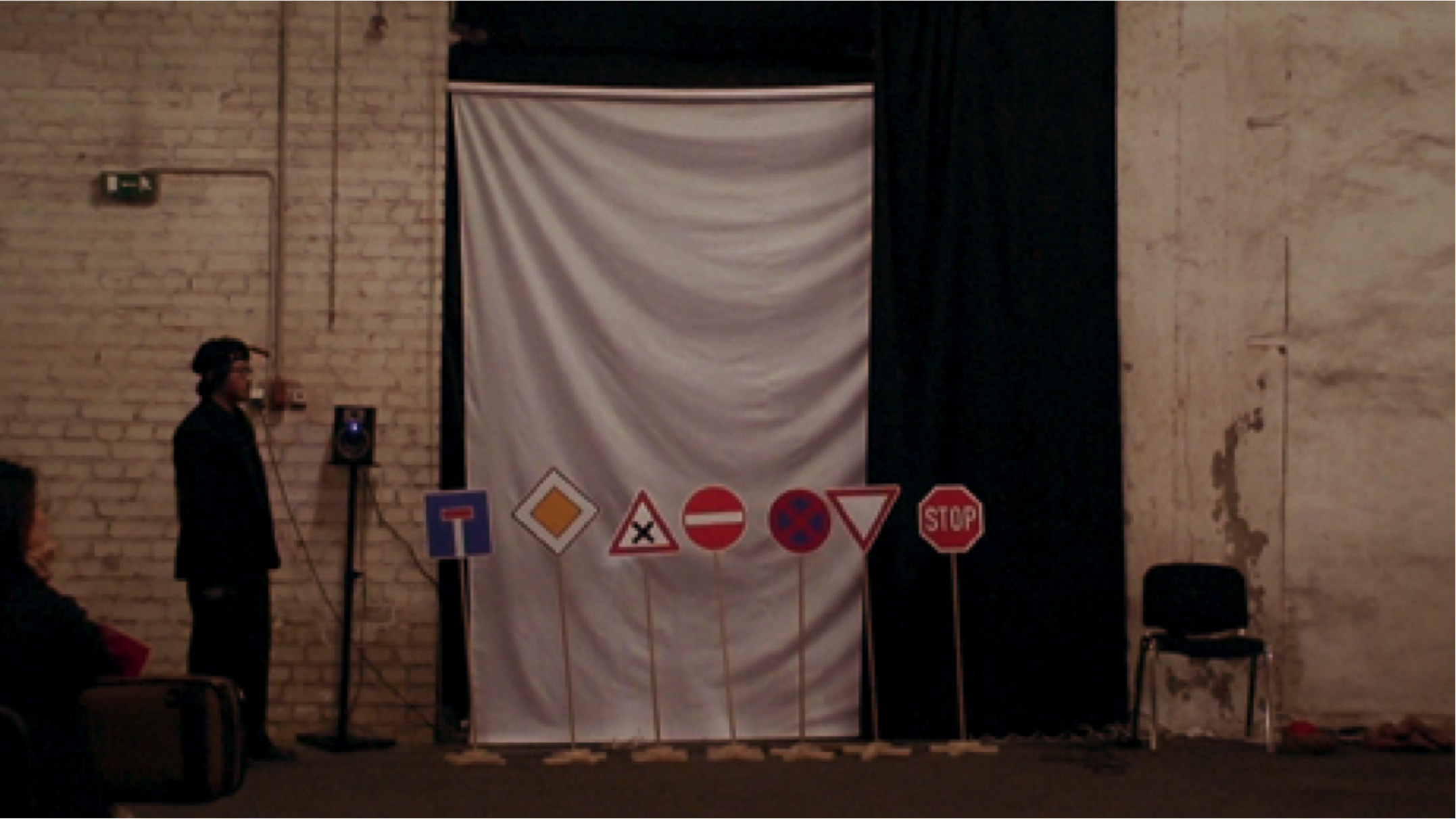 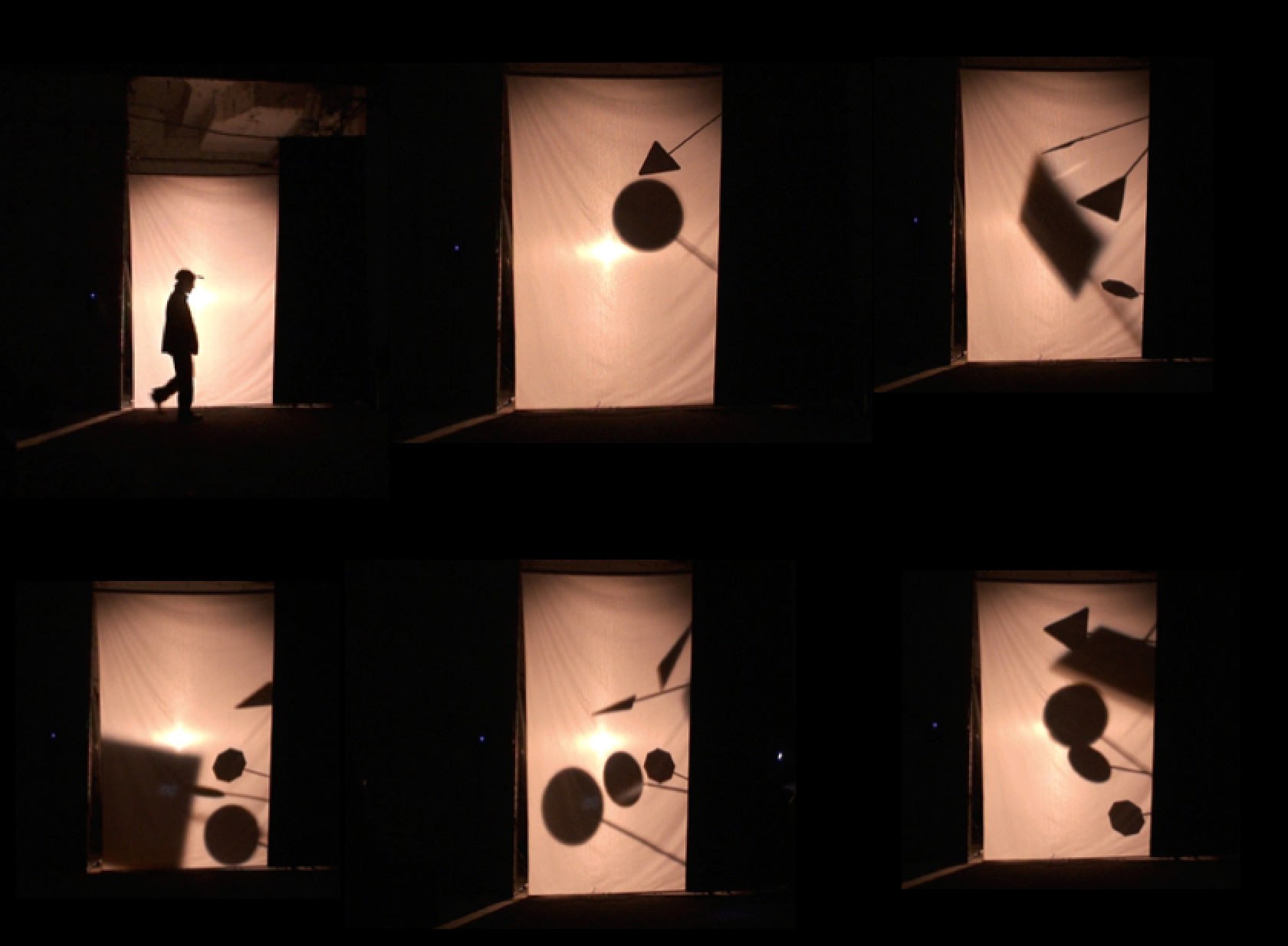 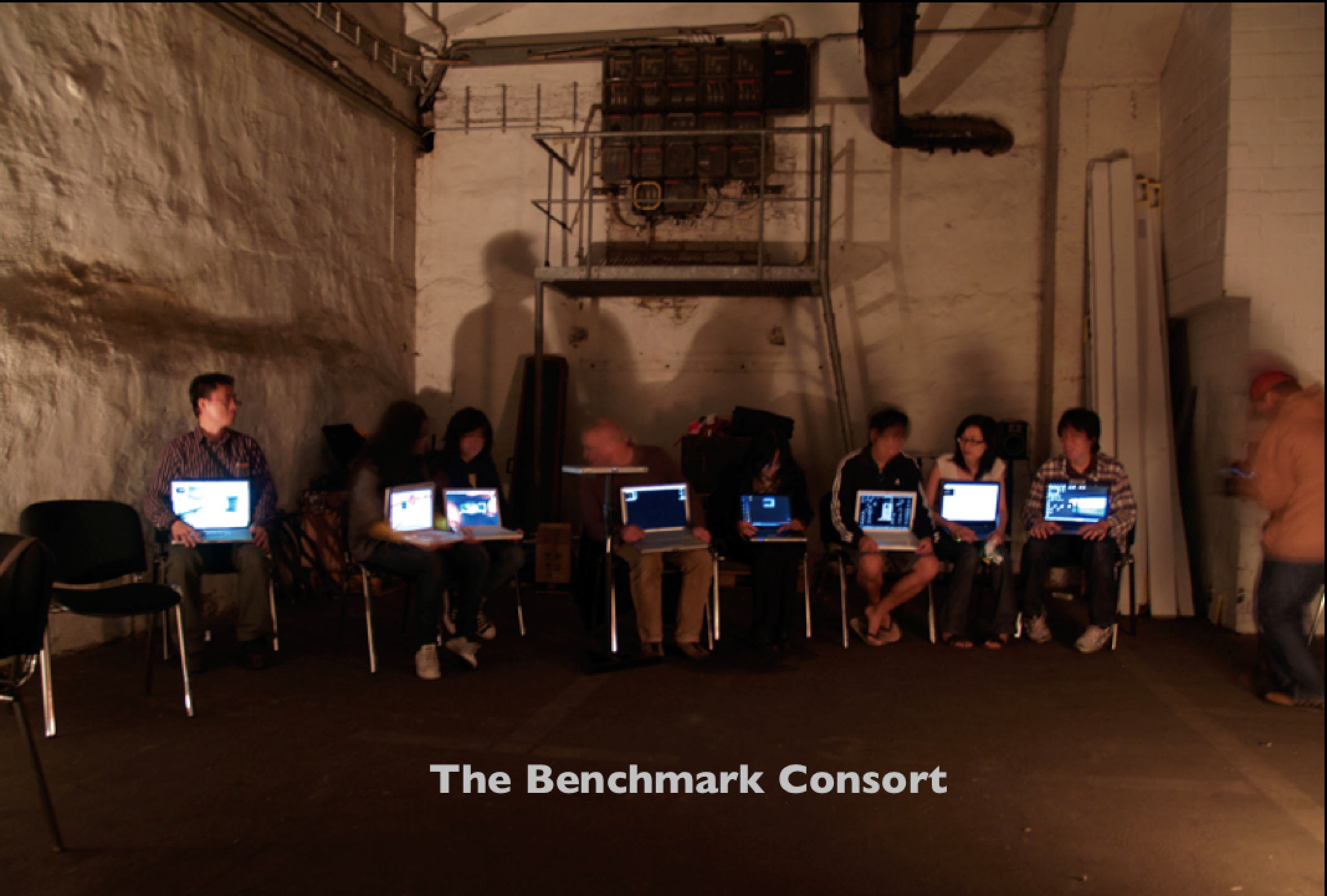 2008 [S_Chatten] flyerIn 2007, the National Chiao Tung University (NCTU) in Taiwan, one of the participating universities of the “Pursuing Excellence Project” for the goal of “striving toward the top 100 universities in the world” set by the Ministry of Education, submitted an art proposal to “Kulturamt der Stadt Köln (Cultural Office of Cologne City)” and “Kölner Gesellschaft für Neue Musik (Cologne Association for New Music)” in Germany. In the proposal, a multimedia interactive project “S_Chatten”, which means “chatting with light and shadow,” was proposed for consideration. After a few revisions, the proposal was accepted and the opening date and location were finalized on September 6th, 2008 at Deutzer Bridge, Köln, Germany. A budget proposal was then written up for applying university funding, albeit partial funding was guaranteed by the Cultural Office of Köln City. A cross-disciplinary team consisting of 4 faculty and 9 graduate students from art, music, and architecture areas was formed after the university funding was secured.

Project S_Chatten is an interactive installation interwoven with live music and performing arts held in a tunnel-like space of 500-meter-long by 10-meter-wide under Deutzer Bridge. To accomplish this large-scale project within two years and under a total budget of 73,500 US dollars, the university faculty and students have had to work closely and creatively to fulfill the project goal. The goal was to achieve an idiosyncratic interpretation and artistic expression of light and shadow within the geographical and cultural contexts of the Rhine River in Köln City, and the island of Taiwan located on the Pacific Ocean.

This project imparts many dimensions of innovative teaching and learning experiences, which include a full range of concerns from budget management, team coordination, technological integration, publicity, to intrapersonal and interpersonal relationship development. All of the above teaching and learning opportunities are manifested in a unique context of an interdisciplinary and transnational art project. The faculty and students have learned communication skills and knowledge from other team members with specialties as diverse as musical composing, performing arts, architecture, psychology, design and visual arts.

The aim of our proposed presentation is to share and disseminate the innovative teaching and learning experiences that have occurred in a non-classroom-setting. While executing this transnational multimedia project has provided sustenance for our growth, it has also posed many challenges for the faculty and students. For example, the organizational plan required to execute this project has involved intricate coordination of practicing artists and musicians from Germany and Taiwan. A documentary film of the project will be shared with the audience and the following questions will be addressed in this presentation: What key steps need to be taken to allow the project coordinator, faculty, and students to work together seamlessly? How does a transnational project keep communication venues open and effective among three disciplinary areas and project sponsors from two countries? What things can be done when unexpected spending occurs and the budget is not adequate? Besides gaining more professional experience and knowledge, what does innovative teaching and learning mean in a multimedia interactive project?

The exhibition includes three sections and each section is roughly 150 meters long by 10 meters wide. In the third section is the multimedia installation The Shadow Island (entitled “島嶼闇影” in Chinese or “die Schatteninsel” in Germany). The work was created by the faculty and students of the Institute of Applied Arts at NCTU. They are Wen-Shu Lai, Chien-Wen Li, Wang-Yu Lin, and Nobuo Takamori.The installation includes thirteen colorful, silk-like translucent ships overlaid with a video image of a fire burning. The ships are suspended from the ceiling to create an “illusion of floating in the middle of nowhere”. The work is meant to elaborate on the concept of “chatting with light and shadow” by interweaving layers of audio and video effects from electronic devices and the shadows of the audience of the exhibition. The ships are lit intensively by the fire imagery from the projectors. The burning flames on the surface of the ships, ceiling, walls, and floor create chaotic, but amazingly beautiful visions. The temperature of fire should be high; the commotion of the fire should be out of control. However, in this isolated, enclosed and tunnel-like space, it is much quieter and colder than outside. The sound of dripping water and the whispers of “Do you see the fire?” penetrate the space and the audience. The question leaves the audience room for personal interpretation.Every year in July of the Chinese Lunar calendar, there is a festival called “Burning the King’s Ship (燒王船)” held in Taiwan. The purpose of this ritual is to send the evil spirit, or the spirit of plague, away and so hope for good to come. In the past, Taiwan had been ruled by colonial governments. Now, Taiwan is at the crossroads of an unstable political situation and has no clear or certain status in international society. “On fire” could be used to describe the current political situation of Taiwan. Is the white figure in the flames seeking direction? Is he drifting away? Is he gazing at something? Or is he in a great panic?

Each of the LED-imbedded structures of the ship emanate green light symbolizing the light that glows from within the spirits of peace and healing power within us. Green also symbolizes hope, health and clean earth. The images of dancing flames are a contrast, and at the same time a reflection of, the water from the Rhine River at Köln. At the end of the bridge, there are two TV sets placed on the ground, one showing a film of the ritual of “Burning the King’s Ship”, the other showing a film of Taiwan’s East Coast scenery. There is no narrative or fancy camera movement in the two films, they are simple and straight forward. This is the way the multimedia team members from NCTU send greetings to their international friends. (Realisation: Institut für Angewandte Kunst NCTU)

│Transenden-Tor 穿聲的•透
Transenden-Tor is inspired by the distinctive nature of bridge architecture, its functionality and soundscapes. The hollow, concave tunnel represents a unifying homogeneous structural space which is disintegrated into fragments. The entire 180 meter tunnel is partitioned into zones, achieved visually through the use of sensored vertical blinds with video projections, and aurally by situating an octaphonic system across the tunnel so that different soundscapes outline each of the fragments.These complex reflections create supernatural illusions that are constantly changing in space. In other words, visual combinations occur in 3D and travel across adjacent zones.
There is one key determinant that governs the variations within the entire tunnel. This is the deep drone that results from the trains passing above. The drone sets the vertical blinds consecutively in motion and change the multifold reflections inbetween. In a similar fashion the drone triggers a computer generated resonance, which chases the trains in a similar fashion.
Each partitioned zone has a specific visual and aural setting associated with a different culture and time. The participant functions as a medium connecting and traveling between space, culture, and time. (Realisation: Institut für Musik NCTU)

Connector is an interactive installation that by means of bikes, objects, images, and audience participation represents the many intrinsic forms of “connectors.” The exhibition space itself is also a connector between the entrance and two exhibitions. Everything in this work reminds the audience, in a babbling manner, of the existence of connectors.Connector is an art work from the architectural perspective. Architectural design is an activity of relationship manipulation by which a pattern of sophisticated relationships are proposed under the constraints of subjective and objective factors within the context of space, people, objects and events. When we try to realize a relationship, we inevitably notice the connectors that form that relationship.
Connectors exist in various forms and behave differently. The following common features describe them in a general way: Causality: The world is constructed by relationships, and nothing else. Everything is constructed by a specific pattern of relationships. We see the world, but we usually neglect the fact that to build a relationship (the effect) there must be at least one connector (the cause), no matter what form it is in.

Ubiquity: A bridge, a street, a tunnel, and a cable are connectors that tie physical or spatial entities. The umbilical cord, direct mail, and a classroom are connectors that form kindred or social relationships. Passionate words, a love song, and eyesight are connectors that bridge sensitive souls. Sophisticated relationships in this world are formed by all kinds of connectors. Look around and try to see the world through the eyes of relationships—they are ubiquitous.
Iterative Construct: There are relationships that lie between everything. Everything is constructed by relationships. A connector is a pattern of relationships and is hence constructed by connectors. Connectors construct the world, iteratively. All things in this world are connectors per se, aren’t they?
When audiences enter this nearly empty area, they see a number of free to use bicycles. Audiences may ride a bicycle to the end of the section to see other exhibitions or to enjoy their time in this area. Without external force, as long as we are willing to make an effort, the bike becomes an extension of our mobile body, and also changes our spatiotemporal perception of the exhibition space. However, a bike should not be just a mobility platform or carrier, there should be more relationships between the bike and the rider. Therefore, the Babble Bike was born to reflect this argument. The Babble Bike sings or talks when it is bored, when one rings the bell the others respond in return.The core of the Babble Bike is the Babble Box. The Babble Box provides simple functions for greeting and responding by infrared signals and sound—they are all connectors. Such babbling might trigger the illusion of reality—that the bike is a live thing that can react and response—though we all know it is not. This reminds us to rethink the significance of connectors.In the middle of the space, a slideshow on the wall displays a series of images and messages. It asks the audience the following questions: Are they connectors? What do they connect? How do they connect? How do we utilize them? Do we disregard their capability? What else could be connectors? Are we connectors, too? What do we connect? Keep asking. Keep thinking. And keep connecting. (Realisation: Institut for Architektur NCTU) 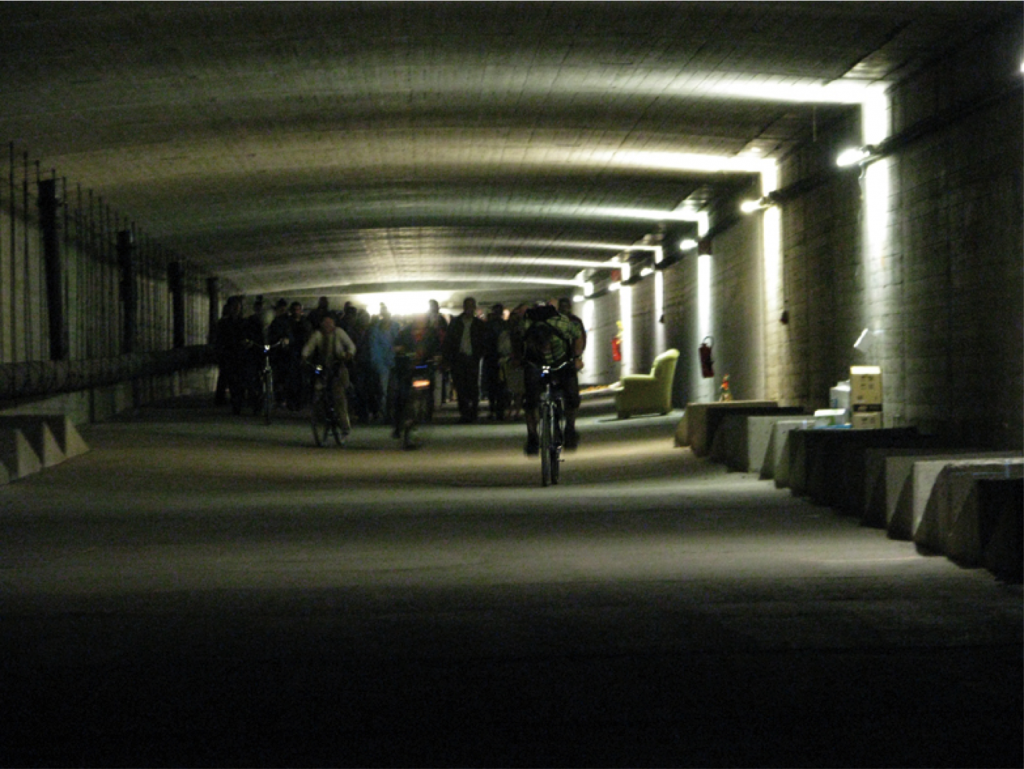